Backing up and Restoring Servers¶

To help prevent data loss, you and your users can back up and restore servers.

In this topic, you'll learn how to do the following:

Differences Between Full and Incremental Backups¶

Incremental backups are available only for plans with the ThinLVM storage type.

A full backup is a copy of the whole server disk without its configuration. An incremental backup contains only the data that has changed since the last backup date.

Compared to full backups, incremental ones have their advantages:

However, incremental backups also have disadvantages. They take more time to be restored, and it is easier to accidentally lose the possibility to restore them.

If, after you weighed up the pros and cons, you’ve decided not to use incremental backups, you can stop reading here and move on to setting up the backup feature.

Full backups are independent of each other and restored individually. 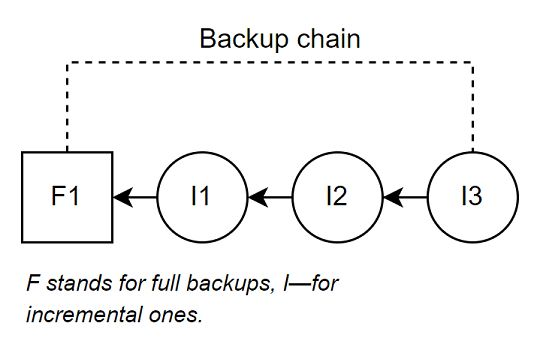 When enabling backups in a plan, you can set the limit of backups a user can have per server. This limit includes all types of backups: manual, scheduled, full, and incremental (if any).

When you enable incremental backups, the following things happen: 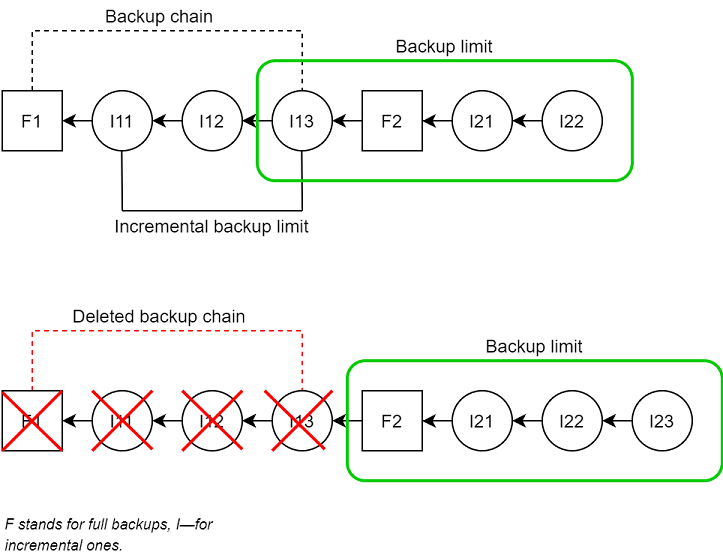 All of this happens under the hood. Users don’t see any difference between full and incremental backups in the User interface. They also don’t know that they have some backups stored on a backup node beyond the backup limit.

However, you as the SolusVM 2 administrator see the actual number of backups stored on a backup node both in the Administrator and User interfaces.

Setting up the Backup Feature¶

Before you and your users can start creating backups, you need to do the following:

A backup node must meet the following requirements:

To add a backup node:

The backup node was added.

Now you need to enable the backup feature in a plan's settings.

To enable the backup feature:

You've set up everything necessary for backups. You and your users can now back up and restore servers.

You and your users can create both scheduled and manual backups. You can back up manually at any time or you can schedule backups to be created automatically and periodically.

All new servers have the backup feature turned off by default. You and your users turn it on individually for each server.

To back up a server:

Users schedule backups in the user interface (go to Projects, click "…servers", click the name of the server for which you want to schedule backups, and then go to the "Backups" tab). At the moment, users can create manual backups only via the API.

One server is backed up to one backup node at a time. Several backup are queued and the first tasks to come are processed first. The process of moving backups to backup nodes depends on your configuration:

Backup restoration overwrites all data stored on the server with those stored in a backup.

A server with the qcow2 image format loses its snapshots after being restored from a backup. It happens because of the way snapshots are implemented for qcow2.

To restore a backup:

Restoring a backup usually takes one minute to start. Restoring tasks are processed one after another, one restoring task at a time.

This irrevocably deletes a backup from the backup node where it is stored.

You as the SolusVM 2 administrator can delete backups manually or have them rotated and deleted automatically.

You can also delete backups manually but with the following limitations:

To delete a backup manually:

Differences Between Backups and Snapshots¶

SolusVM 2 offers two ways to copy servers and prevent data loss: to create backups and to create snapshots. Although backups and snapshots serve more or less the same purpose, they have differences, which you can see in the table below: